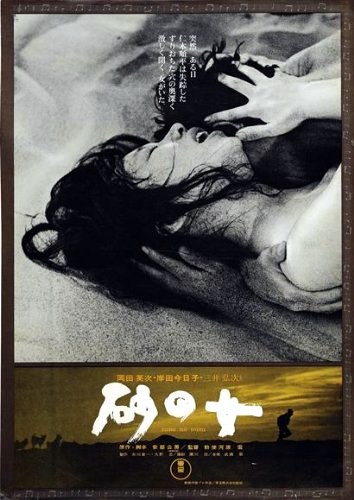 Woman in the Dunes

Here’s a film I’ve been meaning to check out because I’ve always seen it on Criterion and was curious to see what the film was about. I have seen a fair few Japanese films from the Golden age of cinema of decades past, although most of this exposure comes from watching Akira Kurosawa’s work. Thanks to TCM having a Oscar movie marathon running for a month I was able to check a few foreign titles that had peaked my interest. After viewing this film, I have to say that its extremely enthralling.

The film starts off with close shots of bugs crawling in sand. That is because they are being photographed and collected by Niki Junpei, a schoolteacher. As he is strolling the sand dunes he misses is bus back and the locals tell him to spend the night. They tell him to climb down a ladder into a dune. There he finds a house with a woman inhabiting. The woman lives desolate ever since her husband and daughter were killed in a sandstorm. Everything seems normal until Junpei realizes that the ladder has been pulled back up. The villagers require the woman to dig for sand to make a profit off of it, and now Junpei must live with her and do the same.

The premise sounds insane, I know. It is. Through the trickery and sudden change in life Junpei is initially very resistant to this. He tries to escape but to no avail. Time goes by and Junpei develops feelings for the woman and becomes obsessed with the idea of creating drinking water through manufacturing it through damp sand. Without getting too much more into major plot points I got to say this film is rather excellent. Its long, so it feels like you are there for the long duration for which Junpei is sentenced to live in the dune. You watch as his state of mind changes. Its a very simple film but the two leads do a really wonderful job and really feed off of each other.

The films music is jarring and at times minimal, the cinematography is great despite being limited in locale. The vast arid nature of the dunes is captured, and you long and root for Junpei to live his situation and make it back home. Its a unique film, I don’t recall seeing many films like this. Its a wondrous tale of a simple man who is forced into a situation where he must come to terms with his feelings, survival, and will.