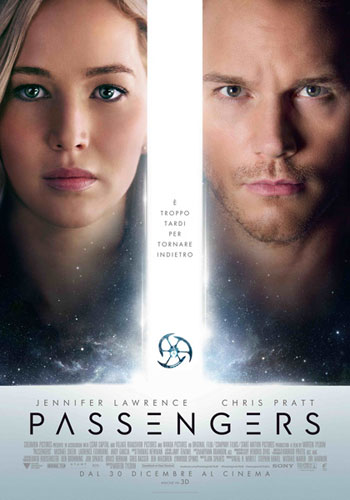 Two of Hollywood’s current top stars finally come together in this sci-fi adventure from Morten Tyldum. Its not a name that rolls right off the tongue or is too familiar but I have seen his previous effort, The Imitation Game. While it was  a technically well made biopic about an important man, it wasn’t all that interesting. I wasn’t too impressed with the trailers for Passengers as it looked like a cookie cutter sci-fi film coming in a time where these types of films are really popular.

The film is basically what I had feared that it would be. First, let me talk about the positives. I had no problems with the effects in the film. I thought the space scenes looked good and the set and production design was excellent. The spaceship looked sleek, modern, and alluring. The score was also nice. Both Chris Pratt and Jennifer Lawrence work well together and put in good performances. I think Lawrence overacts in the really emotional moments but its fine because she’s good elsewhere here.

The film suffers from pauses and lagging for the first hour or so. Its repetitive at times ad just seems really inconsequential. Nothing goes on for a majority of the film and it drags a slight bit. I did not feel like the film really explored amazingly new ground. Films like Interstellar and Moon covered similar concepts and in a much better way. Its easy to question and scratch your head at some of the motivations of the characters (and androids). About an hour in I was really struggling to continue with the film but soldiered through.

If you are a fan of Pratt or J-Law you may want to check this out. If you are like me and an avid sci-fi/space film fan you may be sorely disappointed by the generic and familiar nature of a film that should have really dazzled with the stakes that the film seemed to offer. Still, I guess you could find some enjoyment out of this film despite it being pretty flawed. Not every film is going to be a masterpiece, I just expected this film to offer something better and more engaging.