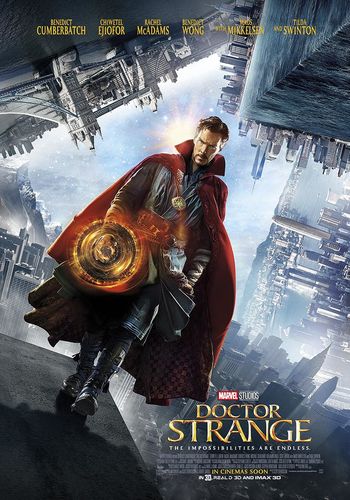 Its no secret that Marvel is a money making machine. The Marvel Cinematic Universe has grossed billions of dollars and remains a force every year. Overall, I think the franchise has been very successful in bringing comic book heroes to life through origin stories and combining the heroes for action epics. Marvel’s latest installment was introducing the masses to Doctor Strange. I wasn’t very familiar with the character so I was cautiously optimistic going into this one.

The films stars Benedict Cumberbatch in the titular role. Benedict is a great performer and I think he’s always remarkable in what he is in. Doctor Strange is about a arrogant but precisely successful neurosurgeon who gets in a life changing car crash that messes up hi hands. Strange searches far and wide for a way to get his hands working again. he travels to Nepal and is introduced to a fantastically magical world of sorcery where he can do more with his mind and alter reality, time, and the world from harnessing the power within.

First off, the effects in this film are great. Its immensely psychedelic and extremely graphically busy. The skyline is constantly shifting and worlds are bending and all of it looks up to par. It was reminiscent of some of the sequences seen in Inception. The fight scenes in the film also do not disappoint. Its got what it needs to keep thrill seekers engaged. Marvel also gathers a very talented cast to add to its never ending list of A-listers involved in the MCU. Mads Mikkelsen is a brilliant performer, although he’s a bit of a shallow villain in this.

The film has too much going on in concepts. A person’s soul? can come out of their body, there is a giant demon thing that’s trying to destroy the world, there are shortcuts that lead to major cities, buildings can be moved, there is a mirror reality, a moving cape, fireballs, time can be put on a loop… its insane how many things happen in this film. Its not that its hard to follow, its just that the film becomes conceptually ugly the longer it goes. It doesn’t feel like other Marvel films as the world that is created isn’t very interesting and feels bland despite all the visuals involved.

Cumberbatch plays a great Doctor Strange. He’s an egotistical guy who becomes humbled and is yet witty and remains flawed. He’s a welcome addition to the Marvel Universe, I assume he will be a part of the next Avengers film. Its just that this origin film doesn’t really stand out as you are just thrown into the world of sorcery and just have to accept what is going on. Its an admirable effort but pales in comparison to some of the other heroes in the MCU. There is still room for improvement and I’m curious to see where this goes.