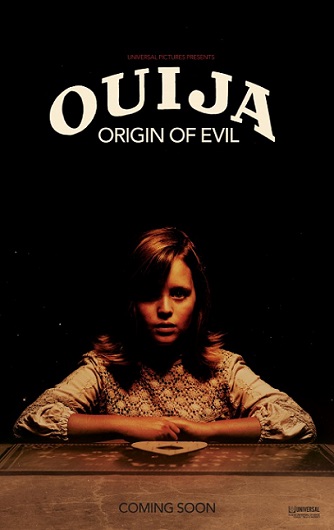 When I first heard about this sequel/prequel my initial thoughts were: “Who the hell asked for this?” The first Ouija was cookie cutter horror film. It use the device of a ouija board (and the mystique and eeriness of it) as a crutch for the thin, awfully written that followed. It was a completely forgettable experience, so one would wonder why the film series was brought up again. Its a good thing that first impressions are just what they are because this prequel is not bad at all.

The film was in better hands when it was announced that Mike Flanagan would be directing but I was still mixed. Oculus was actually pretty great. A creative idea that was actually pretty emotional and investing. Flanagan’s followup was the Netflix film Hush. I know a lot of people loved Hush but maybe these people don’t watch movies often or are lenient to what they see on Netflix. Hush was terrible. I don’t want to go into it here but maybe some other time I can explain how improbably dumb it really is. Anyways, this film is a prequel of sorts to the first and is based on a family who help people move on from their passed loved ones by staging seances. A ouija board causes dark spirits in the house to possess a young girl leading to trouble and at times, some wicked fun.

The film is set in the 60s and you can immediately tell by the film style. The style is of a film you’d see from that era; they even used the old Universal Pictures logo at the start of the film. Its not just the post production editing of the film but the costume, music, and just all around aura is done very well. No one knows her well yet but Lulu Wilson made this film. She does a great job and there are a few moments (where the script was fantastic) and she was able to come off as unsettling, just from saying her lines. She is without a doubt the strongest point of the film.

The film isn’t without flaws. The third act isn’t exactly fantastic as some questionable things happen and you scratch your head wondering if there could have been a better resolution. There definitely could have been. Also, the CG does look ropy at times but I think that can be forgettable as the film offers decent entertainment value. Here’s a film that sacrifices scares for build up, good performances, and focus on the story of why spirits have possessed Doris and the circumstances surrounding whats going on. I can respect that.

I’m usually extremely critical of horror films because these days so many films go for jump scares and have no substance. There are exceptions that are becoming smart, nostalgic, or reinventing the horror genre. I don’t think there is anything innovative about Ouija: Origin of Evil but its a massive improvement over its predecessor and is a film has a good amount going for it to make for a good time.