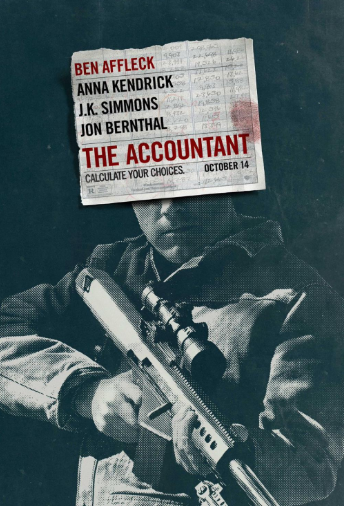 Ben Affleck’s had a resurgence in his career as of late, mostly through his directional efforts. Here we have a thorough performance of a high functioning accountant with autism, who also happens to be skilled combatant and marksman. The plausibility of such a character existing may be up in the air but it doesn’t deride the entertainment that the film provides. I’ve been told by a few sources that his portrayal of a person with autism is consistent with behaviors on the autism spectrum disorder. This is a character type that we do not see often in cinema so its nice to have a hero of the sort.

The film offers math lingo and if you are like me, its easy to have your mind wander. However, the film makes up for it with sleek action, characterization, and a sense of thrill throughout. Jon Bernthal may as well be typecast as the bad guy we love to hate because he plays it very well. JK Simmons and Lithgow are available in doses although in a lighter aspect as the film revolves around the lead character’s plight, as he is being hunted down by multiple sources. The film offers a good time with action that isn’t in your face but sufficient and present when you need it.

Anna Kendrick keeps the film grounded and real. She’s the character we identify with if we can’t do it with Affleck’s Christian. She has her regular awkward nature, but this role is slightly more subdued in the humor to fit the tone of the film. She’s still great though. Not sure on the chemistry she had with Affleck but it works from a professional standpoint. Also, seeing as Affleck’s character is supposed to have disengaged social interactions, it probably makes sense. Parts of the final act are a bit too convenient and I can’t say the twists and thrills always feel organic, however the film still offers a fun times. I think ultimately the film is a solid action film disguised inside of a smart and technical world of accounting and embezzlement. Its certainly a step up from what we’ve seen previously from Gavin O’ Connor. He’s bounced back from a truly terrible Jane Got a Gun and may even have a franchise on his hands, if that’s what the public want.