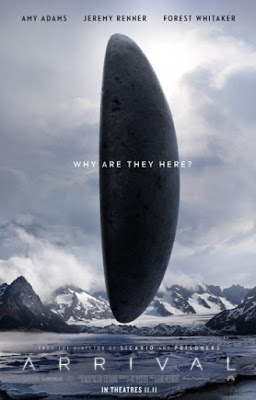 Arrival
I think I get swept away with the hype I’ve seen from others because I thought this was slightly disappointing. Not a bad film but I wanted better. The film starts off very well, I got a great sense of grief and something foreboding and the excellent score and build really helped with that. Just about the time of the reveal and on I think the pace of it dropped. I appreciate the language aspect/symbol element of what went on but it was long and not always interesting. I liked the end though. Without going into detail of what happened the film’s form of narrative is worth praising especially as the credits roll. Pacing is not always perfect in the film. Sci-fi lovers will probably love this film but I think its predecessors do it better. Definitely worth a watch but not over the moon about all of it. Denis Villeneauve is excellent at setting a dark and inquisitive atmosphere in this film much like some of his previous work. I’d still say Enemy is his best effort but I look forward to seeing his next outing.